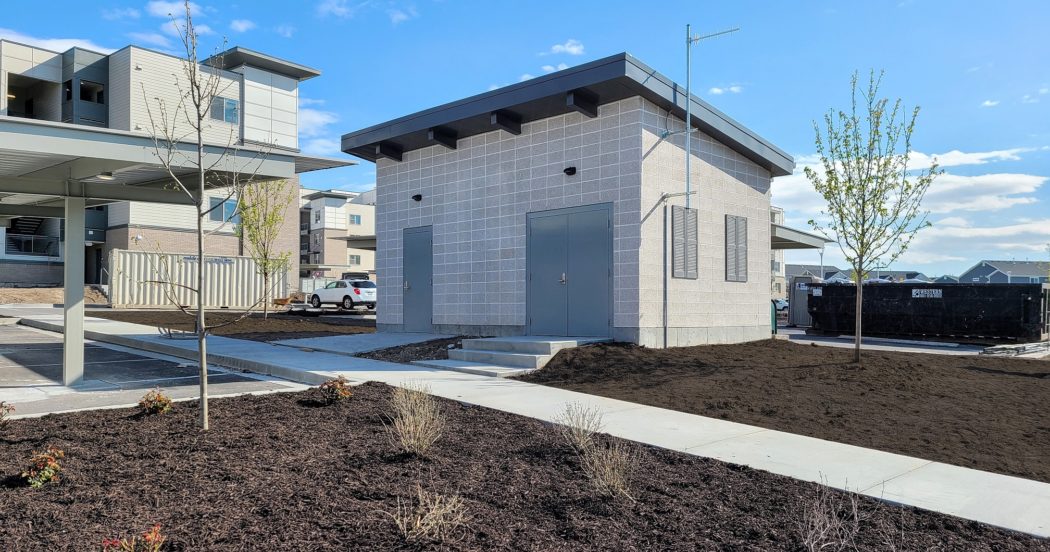 The City of Bluffdale, Utah, has completed its Independence Well, a unique project on the site of newly constructed apartments. Hansen, Allen & Luce (HAL) was the project’s design engineer.

The City had acquired a historic sod farm well and sought to upgrade it for use in the City’s pressurized irrigation system. The project brought several challenges:

HAL and the City solved these problems with a unique approach involving both temporary and permanent components.

Rapid initiation. Because constructing permanent infrastructure would take time, the City opted for a temporary pumping setup during the first irrigation season. The custom setup was installed and operating just a few weeks after bidding. Besides buying time, the temporary solution allowed HAL to observe the well’s performance and the local water demands which would inform the final design.

Compatible architecture. Between irrigation seasons, HAL designed the permanent pumping equipment, building, and site. HAL coordinated with the City, the developer, the architect, and the construction team to ensure that the project would fit in with the rest of the development, which was completed just this year. The well house’s exterior shape, materials, and colors match those of the apartments.

Water rights lease. As a short-term solution HAL facilitated an arrangement to lease excess water rights from a neighboring industry. HAL then advised the City on the purchase and changing of local groundwater rights, which were approved by the time the final project was completed.

The new facility was named the “Independence Well” after the neighborhood it serves, but the name also signals the City’s shift toward securing its own secondary water sources.