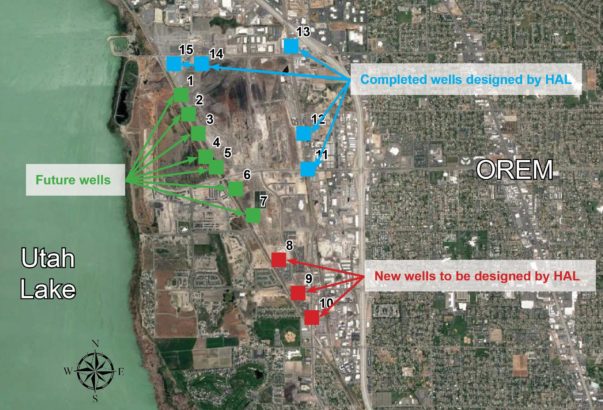 In 2011 Hansen, Allen & Luce (HAL) was awarded a contract with Central Utah Water Conservancy District (CUWCD) which resulted in the engineering of two exploratory monitoring wells, five 24-inch-diameter production wells, and three well house pump stations. These wells pump from the deep artesian Utah Valley aquifer, were drilled up to approximately 1,600 feet in depth, and have been equipped to pump up to 6,000 gpm. In June 2017 and as an extension to the 2011 project, HAL was afforded the opportunity to assist the District in expanding their groundwater development efforts. As part of the District’s Water Development Project (CWP), this new effort will design and equip three deep, large-diameter wells (nos. 8, 9, and 10) near the south end of the historic Geneva Steel site.

HAL will assist the District by designing and observing construction of three large-diameter deep groundwater wells. As part of this effort HAL has prepared a Well Drillers Pre-Qualification Package and Bidding Documents for completion of well drilling efforts. HAL will assist the District by observing and coordinating well drilling operations, which are anticipated to be completed by reverse rotary drilling in early 2019. Following well completion, HAL will design and provide construction observation services for well houses to be constructed at each site. Water delivered from these new wells will be combined with water from the 2011 well project and delivered to Northern and Western Utah Counties and Salt Lake County.

Challenges encountered during the 2011 well project included artesian pressure, mud control, formation control, the need for lost circulation materials and their proper removal, and the control and disposal of large well discharges. These same challenges are expected for Wells 8, 9, and 10.